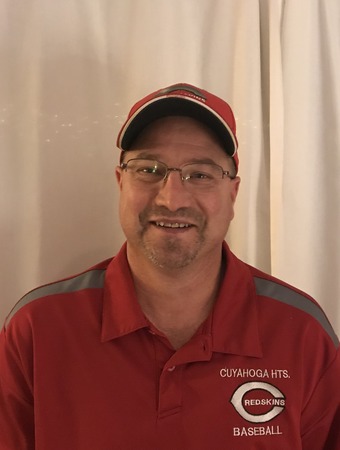 Coach Marc Lowther graduated from Urbana University in 1987 where he played 4 years of baseball for Bob Cawley and Al Fulk.  After graduation Coach Lowther coached at various levels at Columbus St. Charles, Portsmouth Notre Dame, Brooklyn, and Midpark High Schools in baseball, football and basketball.  He began coaching at Cuyahoga Heights in 1995 as a varsity assistant baseball coach and also coached basketball for 7 years and football for 16 years.

Coach Lowther and his wife Becky have been married for 24 years and have 2 sons, Zacary who is 23 and Brett who is 21.  Coach Lowther had the privilege to coach both of his boys in football and baseball.  Zacary attended Xavier University and was drafted in the 2nd round of the 2017 MLB draft by the Baltimore Orioles.  He is currently at the AA level.  Brett currently attends Cuyahoga Community College and will be going on to a 4 year college.  He plans to become a 2nd grade teacher and would like to also coach High School sports.

Coach Lowther would like to thank all of his former assistant coaches, the parents and most importantly his players for giving him the privilege to coach and work with all of them.